Semen is available from nearly all of these sires

Vitulus Has to Be Red EDe 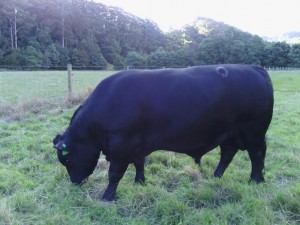 This bull is the only bull in Australia collected and about to be exported that carries the true red gene. Vitulus identified and arranged the original DNA to find this true red gene in this line some 10 years ago and now we have a bull that is well and truly worthy of being called quality. As soon as he returns from collection we will post some more photos.

This bull has won four Royal Show Championships and two interbreeds (including Brisbane, Toowoomba and Canberra). All by the age of three. He may not be large but he is a pocket dynamite of muscle. His calves are all showing that expression of muscle. As one of Australia’s leading seed stock producers said: “he is the best small breed bull he has ever seen” Alaistair Bassingthwaighte.

Herd Book No. 3251
Tattoo GOZ V014
DOB 01.06.00
Sire TRANGIE M354
Dam GUNNA GUMPY QUEENY
GeneSTAR 0 -Star for Marbling, 4-Star for Tenderness; 5- Star for Feed Efficiency
A big masculine bull with lots of mobility and length. The sire of this bull has produced many Royal Show Grand Champions and his dam is perhaps one of the best lowline females alive today.

If you want a bull that will produce show quality stock then this is the bull for you. Kintyre Robert the Bruce is a really long, well muscled bull, and so mobile.

Herd Book No. 4935
Tattoo GOZ Y105
DOB 06.09.03
Sire SANTA FE MAXIMILLION
Dam WYZENBEEF LADY WARATAH
GeneSTAR 0- Star for Marbling, 4-Star for Tenderness; 6-Star for Feed Efficiency
YES this bull is special! His progeny have won both here in Australia and in the USA. As a young bull he won Grand & Jnr Champion Bull at the Farmfest Feature Breed Show in 2004 at 9 months of age. Then Grand and Jnr Champion Bull at Royal Brisbane & Royal Toowoomba Show in 2004 at 11 months of age. Well sprung ribs with plenty of mobility. He has provided some new genetics for our latest line of females.

Tattoo GOZ A200
DOB 16.08.05
Sire Vitulus Y-Red (GOZ Y097)
Dam Goan Black Opal 5 (GOA R025)
Height 125 cm
Weight 550kg
GeneSTAR 5-Stars for Tenderness, 5 -Star for Feed Efficiency, 0- Star for Marbling
This bull is out of registered purebred Lowline parents. He is registered in the American Lowline Herd book and the Ausline Herbook. His sire has produced a number of wild allele carrying young females and his colour, muscle pattern and confirmation makes Awesome Red a much sort after sire. He was the first red sire exported to the USA.

Herd Book No. 3866
Tattoo ABC w042
DOB 31.03.01
Sire Burnt Creek EricDam Burnt Creek Fidelma
Height 126cm
Weight 600KG
EMA TBC
SCAN TBC
GeneSTAR 6-Stars for Tenderness; 5 -Stars for Feed Efficiency; 2-Star for Marbling This bull was purchased as an outcross for Vitulus and we are really looking forward to his 2009 progeny. He has fabulous length and heaps of muscle.

GeneSTAR 7-Stars for Tenderness; 7 -Stars for Feed Efficiency; 2-Star for Marbling
His first three shows have already produced two broad ribbons. Licensed semen available. One of the bigger bulls that we have produced and a great carcass bull.