Never Without a Ribbon

Our Show results are posted under Showring Results 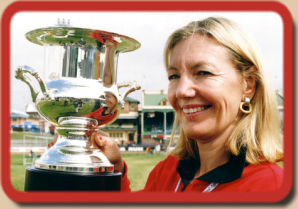 We have been showing at a Royal level since our first Royal Brisbane in 1999.  Vitulus’ unique achievements, making them the only Ausline and Lowline stud to do so, including Grand Champion wins for Stud Stock, Commercial Steers both on the hoof and on the hook and in Branded Beef competitions.

Since its inception Vitulus has earned an enviable reputation in the show ring and in fact the caption on their stud sign says ” Never without a Ribbon” and that’s exactly how they intend to keep it. In their first major showing in 1999 at the Brisbane Royal Show they took out Senior & Grand Champion Cow, Senior & Grand Champion Bull as well as junior Champion Heifer.

Despite their modest size, there is nothing small about the strength of Ausline cattle in the Royal Showring. Judges’ comments convince Margo she is on the right track with Auslines as they develop into a new profitable, alternative beef breed for those with smaller acreages.

What we really need is low birth weight, fast early growth rate, and moderate mature weight. We need those cattle that shift the normal growth curve to fit this pattern and I have been looking for that type of animal in my selection today.
– Anthony Coates, Judge, Sydney Horden Trophy

Vitulus entered the Led Steer Arena in 2005. As stated  in 2007 & 2008 at the Royal Brisbane Show we won Grand Champion Carcass. We have continued to win Champion Lightweight and Reserve Champion Lightweight Led steer with Ausline cross and have been placed consistently in the Carcass competition. These are steers that we have bred. We choose shows where the competition is big, broad and the benchmark is high, as we want to prove our cattle can perform in the commercial arena. Our steers have continually performed in the Meat Standards Australia Eating Quality Awards. This is the benchmark standard for high quality table beef.  Our branded beef has also won a Silver Medal at the Royal Sydney Show.